HOW TO SOLVE CAT LITTERBOX PROBLEMS.

With careful analysis of the cat’s environment, specific factors can usually be identified which have contributed to the litterbox problem. The suggestions in the following article can help you get problems solved.

Housesoiling is one of the most common behavior problems in cats. It is normal for cats to have surface and location preferences for where and on what they like to eliminate. It’s only when these preferences include the laundry basket, the bed, or the Persian rug that these normal behaviors become problems. With careful analysis of the cat’s environment, specific factors can usually be identified which have contributed to the litterbox problem.

Cats don’t stop using the litterbox because they are mad or upset and are trying to get revenge for something that “offended” or “angered them” – that is a myth.

Because humans act for these reasons, it is easy to assume that cats do as well. But cats, or other animals, do not act out of spite or revenge, so it won’t help to give your cat special privileges and hope she’ll start using the box again. If you’ve had your cat declawed, that is not likely to be the cause of the problem either. Studies show that declawed cats are no more likely to have litterbox problems (or to bite) than are cats with their claws. “Stress” (a term that has many meanings) is not often the reason a cat stops using the litterbox. If stress is involved, you should see other behavioral or physical changes as well, such as, weight loss, fearful behavior, or changes in eating or sleeping habits. Punishment is not a way to resolve a litterbox problem. First, check with your veterinarian. Health problems can cause litterbox problems. Cats don’t always act sick, even when they are. Only a trip to the veterinarian for a thorough physical exam, which may include a urinalysis, can rule out a medical problem.

If your cat is given a clean bill of health by your veterinarian, the next step is to determine whether your cat is spraying or urinating outside the box. Spraying is urine marking behavior, and is a cat’s way of indicating ownership of her territory. Marking is triggered by the presence of other cats. It can occur because neighborhood cats are “hanging around” outside, or because of conflicts between cats in a multi-cat household. Unfamiliar objects, smells, or people in the house can also cause the behavior. Spraying has nothing to do with litterbox habits. When a cat sprays, she stands up, backs up against a vertical surface and deposits urine at “cat height” against curtains, doors, walls, furniture, etc.. Her tail may quiver and she may alternately lift her hind feet while she sprays. Male or female, spayed or neutered cats of any age may spray, although the behavior is more common in unaltered males.

Spraying problems can be drastically reduced or even completely resolved by:

Resolving conflicts between cats in the household. If family cats are fighting or skirmishing with each other, you’ll need to help them get along better. Make sure good things happen to each of them in the presence of the other. Punishing the cats is likely to make the problem worse. You may need to separate them temporarily while working on the problem.

Talking to your veterinarian about possible short-term anti-anxiety drug therapy.

If you are finding puddles of urine or feces on the floor, then your cat is choosing not to eliminate in the litterbox. The most common reasons why cats stop using the litterbox are an aversion to the box, surface preferences, location preferences, or a combination of all three. You’ll need to do some detective work to determine the reason for your cat’s change in behavior.

Aversion to the Litterbox

This means that your cat has decided that the litterbox is an unpleasant place to be. The box may not be clean enough for her, she may have experienced painful urination or defection in the box, she may have been startled by a noise while using the box, or perhaps she has been “ambushed” while in the box by either another cat, a child, a dog, or even by you if you were attempting to catch her for some reason. This kind of an aversion may require you to completely replace the litterbox so it no longer reminds your cat of unpleasant experiences. You may need to buy a new box, put it in a new location and use a different type of litter. Remember to keep the box clean – scoop out feces ever day, and completely change the litter anywhere from every three days to once a week.

Surface Preferences
All animals develop preferences for where they like to eliminate. These preferences may be established early in life, but they may also change overnight for reasons that we don’t always understand. If your cat often reaches out and scratches the carpet after she uses the box, she may come to prefer to use the carpet instead of the litterbox. Many cats seem to develop a preference for either soft surfaces such as piles of clothes or the bed, while others may prefer slick surfaces such as the bathtub or the kitchen sink. Cats with an outdoor history may prefer dirt or grass. To resolve a surface preference problem, the material in the litterbox needs to be made less attractive. For example for a soft surface preference, try the new fine-grained, clumping litter. If your cat has been using the bathtub, spray with No-P™ Housebreaking Aid and give her a slick surface in the litterbox by placing very little if any litter in the box. If your cat has been outside, try generic potting soil in the box.

Location Preferences
Your cat may decide that she likes to eliminate in a particular location. Maybe her preference is for a quiet, protected place such as under a desk downstairs, or in the closet. She may like to go in location where the litterbox was previously kept, or maybe where a particular odor is located. Location preferences can be dealt with by moving the box to the preferred location, leaving it there until your cat uses it consistently for several week, and then VERY GRADUALLY moving it back to where you want it to be. If your cat does not use the box when you move it, then it is not a location preference problem.

Clean Soiled Areas
Soiled areas can be made less attractive by cleaning them. Be sure you REMOVE all of the urine out of the soiled areas, don’t just cover the urine up with odor masking products.

Discourage Urinating in the Same Area
Clean the areas thoroughly. Make the carpet or soiled surfaces less attractive by covering them with double-sided sticky tape, plastic, or a vinyl carpet runner with the point side up. Give the areas an unpleasant smell by spraying the plastic, or vinyl carpet runner with No-P™ Housebreaking Aid. When sprayed on the soiled area, No-P™ Housebreaking Aid will eliminate the urine scent so your pet will not re-urinate in that area.

We strongly advice that you REMOVE the urinated areas in your carpet using a DRY powder. This will allow you to REMOVE the old urine (and stains or odors) deep in the carpet, WITHOUT causing the urine to penetrate deeper into your carpet and padding. After you have treated these areas and removed the old urine (and stains or odors), you may THEN have your carpets professionally cleaned by alternative carpet cleaning methods.

If you need some stains & odors removed, Planet Urine can offer you some IMMEDIATE relief…
a) Use our Basic Stain Remover System if stains are your biggest concern.

b) Use our Ultimate II Stain & Odor Remover System or The Godzilla Buster if odors are a concern. We include a FREE blacklight with each System. The blacklight is used to locate urine odors.

Invisible Urine Odors
Invisible urine odors in carpet attract cats to repeatedly re-urinate on those affected areas. This makes getting your cat to use the litterbox very difficult, if not impossible.

If there is no way to show where the urine odor sources are, you don’t know where to treat the urine stains. Consequently, your cat is repeatedly attracted to those areas to re-urinate on them. The best solution is to locate the invisible urine odors with a urine odor detector blacklight.

WOULD YOU LIKE TO FINALLY SOLVE YOUR LOVING CAT OR KITTEN’S URINATION BEHAVIOR PROBLEMS?
ARE YOU AT YOUR WITS-END AS TO WHAT YOU CAN DO?
At PLANET URINE – The Pet Happy Home Specialists, we’ve put together a panel of highly specialized animal behaviorists to HELP YOU understand and STOP your cat or kitten’s urination problems in your home. Our Animal Behavior Specialists are available to help you FREE OF CHARGE with any of your pet behavior problems.

ALL YOU HAVE TO DO IS ASK
You will then be able to work personally with an Animal Behavior Specialist. FREE One-On-One expert consultation will help you through your cat or kitten’s training or re-training period.

We want to be sure that your cat or kitten remains a loving, and most importantly, a lifelong member of your family. 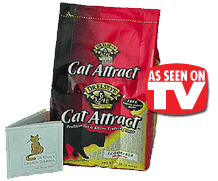 20lb bag Cat Attract™…the problem cat and kitten training litter. The new scoopable litter that provides a solution for cat owners whose cats do not use their litter box!  Learn More. 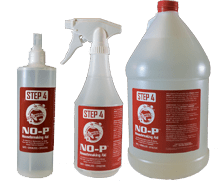 An effective deterrent to keep your pet from re-urinating in the area/s you've cleaned  by eliminate the urine scent. Learn More. 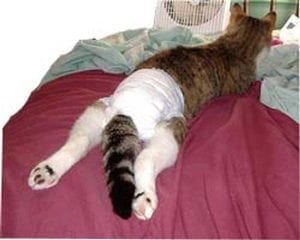 Sizes from x-Small to X-Large

Let your cat, kitten, dog or puppy, roam around the house again! These disposable cat, kitten, dog & puppy diapers come in many sizes and will work for all sizes of cats and dogs. Comes with 10 diapers per pack.
Learn More 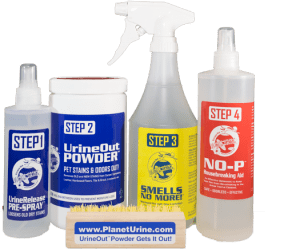 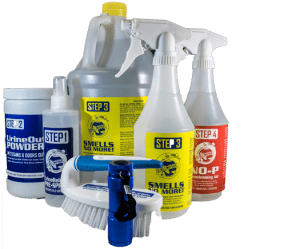 Do you want to STOP your pet from PEEING? Discuss your pet problems with an Animal Behavior Specialist!

Do you want to STOP your pet from PEEING? Discuss your pet problems with an Animal Behavior Specialist!